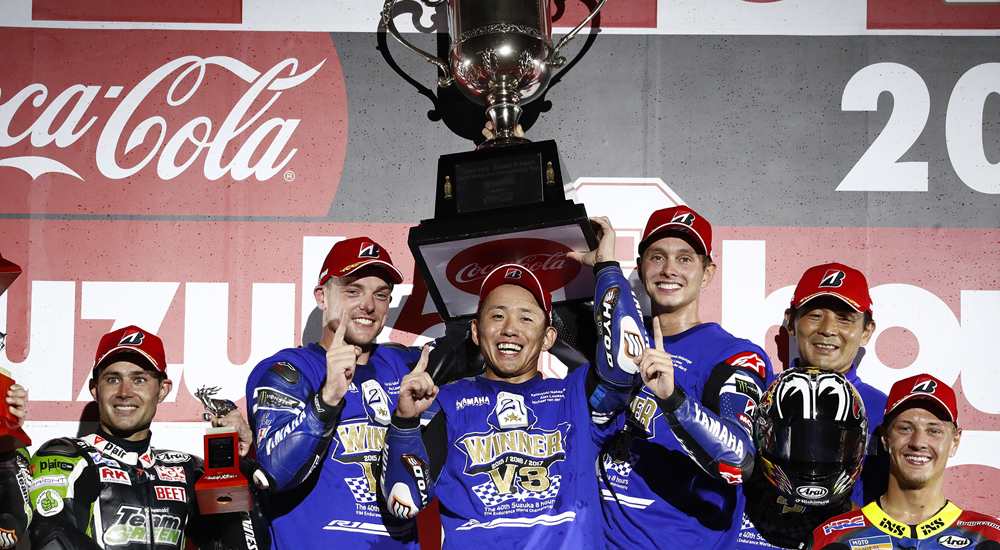 The Yamaha Factory Racing Team wrote an incredible page in the endurance racing history books today, taking their third consecutive win at the 2017 Coca-Cola Suzuka 8 Hours. Lead rider Katsuyuki Nakasuga was initially swallowed by the lead pack into turn one as the race got underway, but quickly began fighting his way back to the front to sit just behind the #634 bike going into the second lap. Never more than 0.1 or 0.2 seconds behind, the hunt ran on until lap 16 when the local hero took the lead briefly before hitting heavy traffic with backmarkers and some light rain on parts of the track.

The first hour was soon up and Nakasuga returned to the pits to hand the YZF-R1 over to teammate Alex Lowes. The young British rider was quick to get up to pace and was soon leading a highly competitive pack by a little over a second. Hard work saw that build to nearly four seconds before it was time to hand over to the team’s third rider, Michael van der Mark. The Dutchman put his head down and was working hard to maintain the lead built by Lowes when disaster struck for the chasing #634 bike, giving the Yamaha Factory Racing Team a big time gap at the front.

From then on, the trio were never troubled by the competition, keeping up their dominant weekend-long pace and building up to a lap clear of the rest of the pack by the end of the race. Lowes took the honour of the last hour’s ride, slightly calmer than his previous stint that saw him break the race record not once, but twice. First smashing the standing 2’07.943 with a 2’07.402, then later delivering an unbelievable 2’06.932 lap. The factory YZF-R1 crossed the line in 1st to the delight of the thousands of Japanese race fans present, writing a historic page in the endurance racing book with the first-ever consecutive triple race win by one team in the history of the race. Nakasuga added to the honours by becoming the first Japanese rider to ever win the Suzuka 8 Hours three times in a row.

Michael van der Mark: “I’m really happy to be here with a different manufacturer and also win the Suzuka 8 Hours. I had two incredible years the first years I came here and two really difficult ones. This year to win with Yamaha is really special and even though the conditions today were not like usual, it was quite a lot cooler than normal so we were able to be faster! Alex and Nakasuga-san had a great pace and I also felt really good on the bike. We had a fantastic team, all three good on the bike with good pace. Yamaha did an amazing job to prepare the bike and team for this event so I will be really happy to come back next year again!”

Team Manager Wataru Yoshikawa: “It is the best feeling, the best! To be honest it was 50/50, as our competitors were very strong. I am really proud to have achieved three consecutive wins with Yamaha, which is an incredible feeling! Now we must look forward and try to build on this. Getting three consecutive wins was a lot of pressure for me, but now I feel that that chapter is closed, so now maybe we can go for four wins in row!”