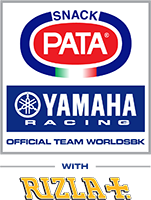 The Yamaha WorldSBK project is operated in direct partnership between Yamaha Motor Europe and Crescent Racing. This collaboration presents a dynamic racing team with highly-experienced engineering staff to extract the best of Yamaha’s proven racing pedigree and winning machinery.

Since the Japanese manufacturer’s highly-anticipated return to WorldSBK in 2016, Yamaha has made no secret of its aim to add to its impressive history within the premier production superbike series – which includes the 2009 title-winning and record-breaking year with Ben Spies along with many other highlights.

From 2017, the Pata Yamaha Official WorldSBK Team with Rizla became regular podium contenders – recording six podiums and showing incredible improvement throughout the season. This upward trajectory continued the following year when the team celebrated its first win with van der Mark’s spectacular double victory at Donington Park in May 2018. The Dutchman went on to clinch third in the overall FIM WorldSBK Riders’ Championship standings with a total of 10 podiums alone.

Last season was another step forward that saw the 2019 Yamaha YZF-R1 WorldSBK machines finish on the podium no less than 17 times including one emphatic win in Jerez, Spain. Then teammates Alex Lowes and van der Mark finished the championship in close third and fourth respectively.

In 2020, with a new and improved YZF-R1 at the team’s disposal, a highly-motivated crew and impressively talented rider line-up at the helm, Yamaha’s sights are set higher than ever before.