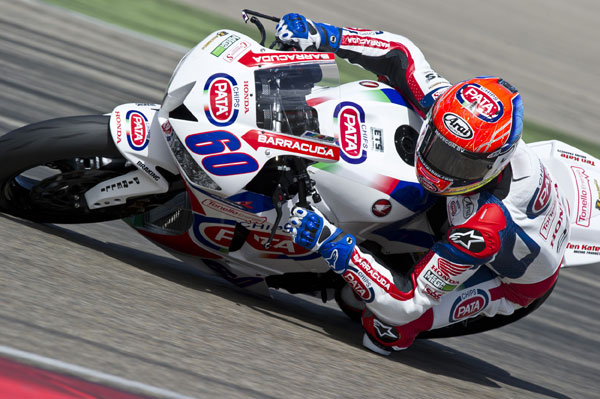 Michael van der Mark was third fastest after today’s two free practice sessions for Sunday’s two second round World Supersport championship races at Motorland Aragon in Spain. The Dutch flyer is seeking his first points of the 2014 campaign after crashing out at the opening round in Australia and ended the day just two tenths of a second from Jules Cluzel’s provisional pole position time.

Michael van der Mark: “I’m quite happy with the performance today, especially following the long break after Phillip Island. I had to get used to the bike again and we had some new stuff to try, which actually didn’t work out how we wanted. But at the end of the first day the second session went really well and I’m happy with today’s result. I think we can go much faster tomorrow.”

Pieter Breddels (technical co-ordinator): “Michael had some engine braking problems this morning as a result of some new things we were trying. They didn’t work out very well so we went back to what we know this afternoon and this immediately gave him an improvement. He’s third and still has a bit of work to do on his last sector, so it’s looking good.”