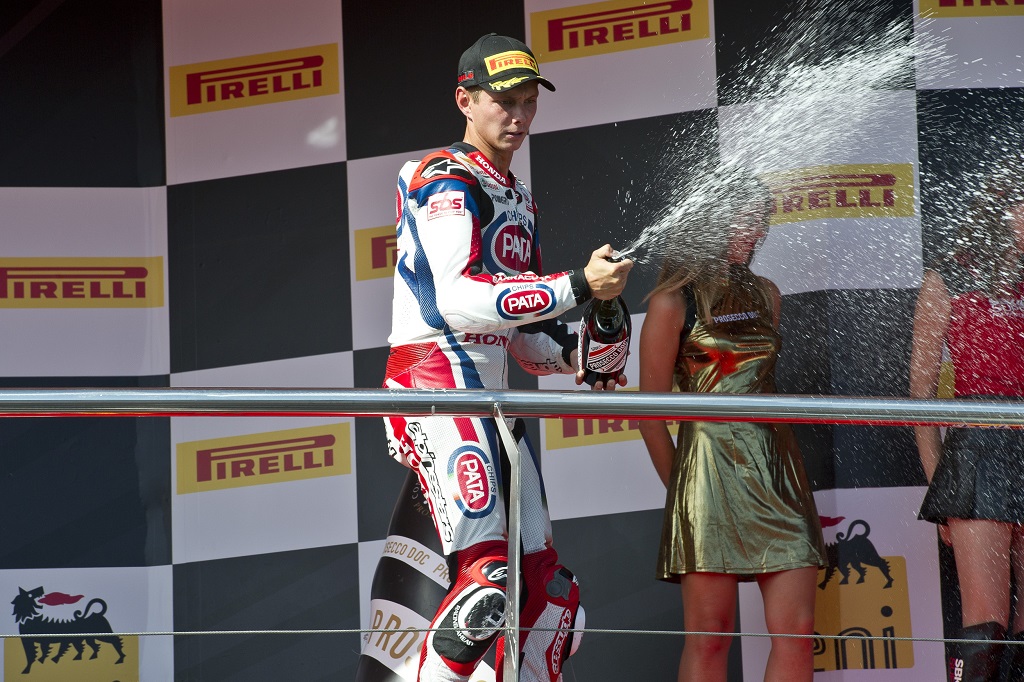 Michael van der Mark took the third podium of his rookie World Superbike championship season today, taking his Honda CBR1000RR Fireblade SP to third place in the first race of round 11 of the series at Jerez in Spain. Starting from fourth place on the grid, van der Mark dropped a position going into turn one but never lost touch with the leaders. By mid-race, the 22-year-old had passed Jonathan Rea, who finished fourth to secure the 2015 World Superbike championship title. It was van der Mark’s first podium since he doubled up at Assen in the Netherlands in April and in this afternoon’s second race he looked to be on his way to another double podium. He had fought his way up to fourth place and was challenging Leon Haslam for the final podium position when he crashed unhurt at turn six. Van der Mark was able to right his lightly-damaged CBR and re-join the race, matching the lap times of eventual winner, Chaz Davies. The Dutch rider finished in 13th place to consolidate seventh place in the overall championship standings.

The Pata Honda team will remain at Jerez for a one-day official test tomorrow before heading back to the workshop in the Netherlands to prepare for the penultimate round of the season at Magny-Cours in France on 2 October.

Michael van der Mark (3rd and 13th): “All weekend I’ve had some difficulties with the clutch, so the start in race one was not perfect. I managed to stay with the guys even though I was missing some grip at the beginning. As the pace dropped a little I was able to close the gap but I had to wait a little more before I could pass Leon [Haslam] and Jonathan [Rea]. I tried to close the gap to Chaz [Davies] but the grip was not there. Race two was a little bit similar at the beginning and I closed the gap to the front as the pace began to drop. I had a good feeling when I got to the back of Torres and Haslam so I was holding back a little bit because I saw they were pushing really hard. Then I just lost the front in a slow corner and crashed. I was able to get back on and do some good lap times before the end of the race and I think overall I must be happy with the performance this weekend. We finally had a weekend without problems and that’s really good for my motivation, and of course the podium is great motivation for the whole team.”