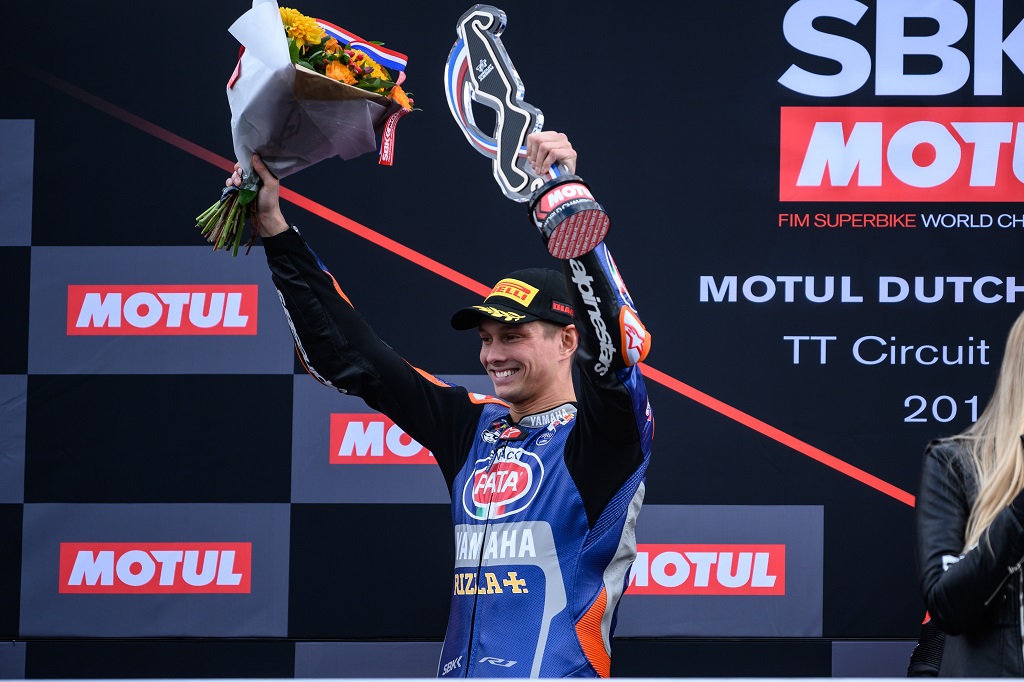 VAN DER MARK DOES THE DOUBLE DUTCH AT HOME IN ASSEN

Pata Yamaha WorldSBK rider Michael van der Mark ended his 2019 podium drought emphatically today in Assen, finishing third in the rescheduled WorldSBK Race 1 this morning and then going one better to thrill his home crowd with second place in Race 2 this afternoon.

Van der Mark lined up in second position on the grid for WorldSBK Race 1, which was rescheduled at 11.00 this morning after being postponed from yesterday due to adverse weather conditions. The Pata Yamaha rider got a good start but an out of the seat moment in the final chicane at the end of the opening lap dropped him back into the clutches of Jonathan Rea, who passed him for third on the entry to turn one. At half race distance van der Mark caught and passed Markus Reiterberger to secure third place, which he held to the line to claim his first podium finish of the 2019 season.

Race 2, held in slightly warmer conditions this afternoon, proved a thriller for the Dutch fans who’d braved the unseasonably cold weather all weekend. While Alvaro Bautista managed to once again pull a gap at the front in the early stages of the race, the battle for the remaining podium positions proved a frantic one.

But with a clear track in front of him, Van der Mark set about chasing down Rea. With just three laps to go the Pata Yamaha rider made his move, riding around the outside of the reigning world champion at the kink at Hoge Heide, one of the fastest corners on the track, to take second place. Rea fought back on the final lap, but van der Mark closed the door on his rival and then out dragged him to the line to claim his best result of the season so far.

Michael van der Mark – Pata Yamaha WorldSBK – P3 and P2: “Today was proper old school Superbike, with two long races in one day. This morning we had to go with the harder rear tyre because the track was quite cold. It made the bike difficult to ride because the rear was spinning quite a lot and there wasn’t so much feeling, but we knew this would be the case and it was definitely the right choice for the race.”

“In the second race the temperature had risen enough to go with the soft option rear, but the pace at the start of the race wasn’t as high as I’d expected. I could see Johnny in front of me, but I was battling with a few riders and trying not to lose position, so I couldn’t chase earlier in the race. I tried to stay calm and, once clear of the battles, I managed to close the gap to Johnny and was planning to make the move with two laps to go. But then the opportunity came to go around the outside of him in a fifth gear corner a lap early, so I took it. After that we had a good battle, I think we touched at least once around the back part of the circuit, but we were both struggling for grip at that point. The team did a great job with the bike this weekend, so thanks to them, and a big thank you to the Dutch fans for their support, in what were very cold conditions for anyone sat in the grandstands. I’m happy we could repay them with two podiums today.”