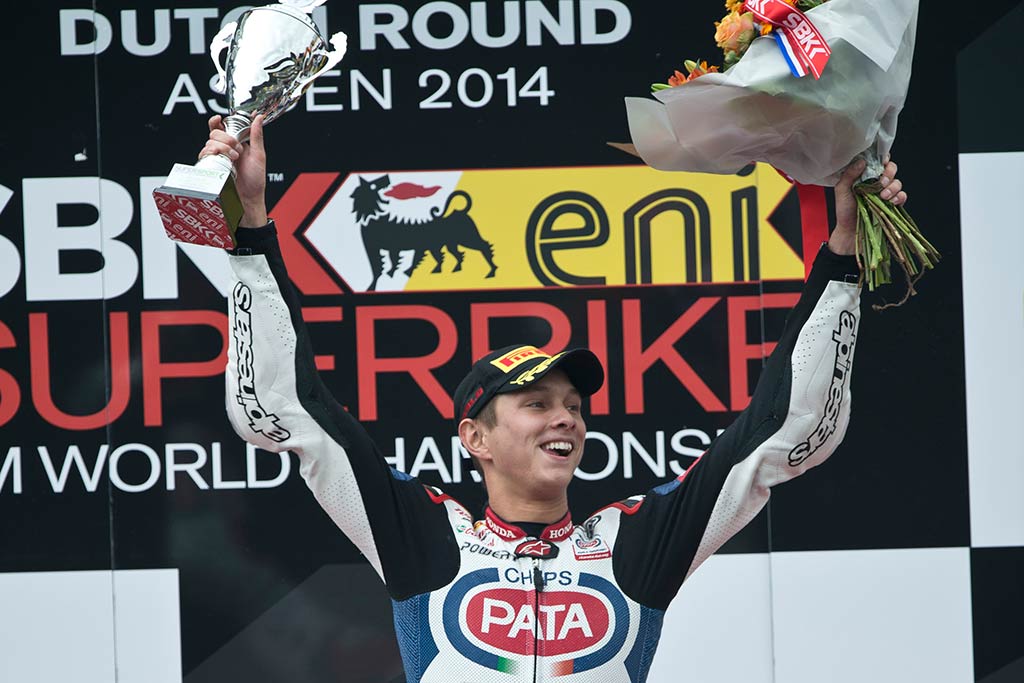 Assen – Holland – 27.04.2014
Pata Honda’s Michael van der Mark won today’s third round World Supersport race at Assen in the Netherlands today, dominating the 18-lap race to the delight of an ecstatic home crowd. It was the first World Supersport race win for the 21-year-old Dutch rider and particularly poignant for his team which is based just 70km south of the 4.542km circuit. Following his second place at Aragon last week, van der Mark now moves to second place in the series, just four points off the lead. Starting from third place on the grid, van der Mark took the lead from Kenan Sofuoglu on lap three and was never headed – putting in a series of remarkably and consistently fast laps, including a new lap record of 1m38.587s, to open up a lead of almost 10 seconds at the flag.

That was unbelievable! We’ve been fast all weekend but my start wasn’t really that great. I was third and followed Kenan (Sofuoglu) and Florian (Marino) for the first two laps and saw immediately that I was faster. When I passed Kenan I kept pushing and the race pace was so incredibly fast that I was able to pull away from the guys all through the race. It was the first time I’ve led my home race and I didn’t want to make any mistakes and at the end I won with about nine seconds. The slow-down lap was amazing to see all the Dutch fans waving and yelling at me! It’s incredible to take your first win in front of your home crowd, plus your sponsors, family and friends. I want to thank everyone, including everyone in my team and the Clinica Mobile, because I had a bad fever this morning and they got me ready to race today.

It was a sensational win for Michael which has made everyone very happy. It’s the first time that a Dutch rider from a Dutch team has won a World Supersport race in front of a Dutch crowd at Assen so we are all very glad. He’s been strong all weekend and in the race he was in another class – at times lapping almost a second faster than the guy in second. He brought it home for a day to remember. Lorenzo had a good race, too, and was fighting for third until the end. He had some front tyre issues which stopped him going for the podium but it’s been a very, very good day for the Supersport team.