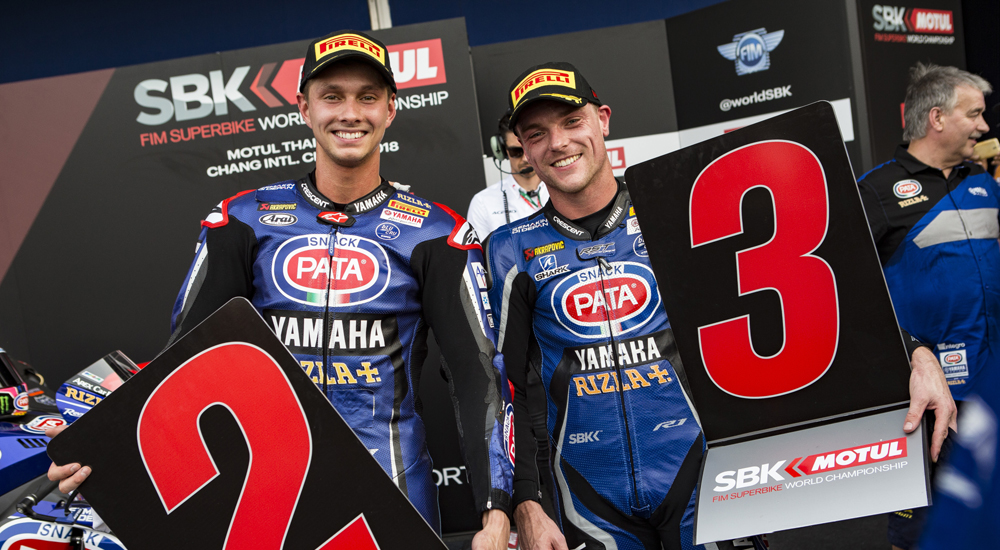 The Pata Yamaha Official WorldSBK Team achieved a stunning Race 2 double podium on Sunday in extremely hot and humid conditions in Buriram, Thailand at Round 2 of the 2018 Motul FIM Superbike World Championship. Michael van der Mark had a great start from fourth on the grid and was immediately involved in the battle for the win, leading the race for six laps and crossing the line in a superb second place to secure his first podium of the season.

Van der Mark finished Saturday’s Race 1 in seventh, slightly disappointed with his pace but happy with his consistency. In an aim to find those extra tenths for Race 2 the 25-year-old Dutch rider tried a different setup in Warm Up but felt it was not an improvement. The team resorted back to his final setup from Friday and, along with a different specification front tyre, it clearly paid off. When the lights went out for Sunday’s race, van der Mark enjoyed a superb start from the head of the second row and became embroiled in an excellent battle with his teammate for the race lead. As has become a regular fixture in the first four races of 2018, the duo swapped places a number of times in the opening laps as they exchanged the lead before van der Mark made a small break on lap 3.

Pushing hard, he opened a gap at the front of the field, leading the way until Chaz Davis managed to hunt him down on lap 8. Determined to fight for victory, van der Mark set his fastest lap (1:33.775) – and the fastest lap of the race at the time – on lap 9 and was right on the back wheel of Davies. Determined not to let him get away, he managed to match his pace lap for lap but could not get past, and as the race went on he started to focus on managing the gap to his teammate Lowes. He went on to cross the line in second, 2.185s behind Davies, to secure his third Yamaha podium and equal his best result for the Pata Yamaha team. In the process, he collected 20 championship points and he is now sixth in the overall standings with 45 points.

It was the second double podium for the Pata Yamaha Team since their return to the WorldSBK Championship in 2016 – to add to the one they secured in Magny-Cours last season.

Michael van der Mark: “I am so happy with this result! Yesterday, I wasn’t happy at all after the race because I struggled so much. Then this morning we changed the bike and it didn’t feel like an improvement so for the race we took a gamble and went back to Friday’s setup. We changed the front tyre and it also helped us a little bit. After the start I was fast, I had a nice battle with Alex again, then Chaz Davies passed me and I tried to stay with him for a long time but he was just a bit quicker than me in some sectors. The pace was quite good and I saw that we were opening a gap to Alex in third. At the end, it was quite difficult for me to stay with Chaz, but then I saw I could manage the gap behind me. So, second place after the results from yesterday and at Phillip Island was really positive! I was riding at the limit but the limit today was a lot further than yesterday so it was a big improvement from Race 1. Aragon is a completely different track so it will be interesting to see how the R1 goes there but after the first two races of the season, I am really happy. There are still a few things I want to improve but if we can start on Friday at Aragon with the same pace and feeling we had today, I will be very happy!”