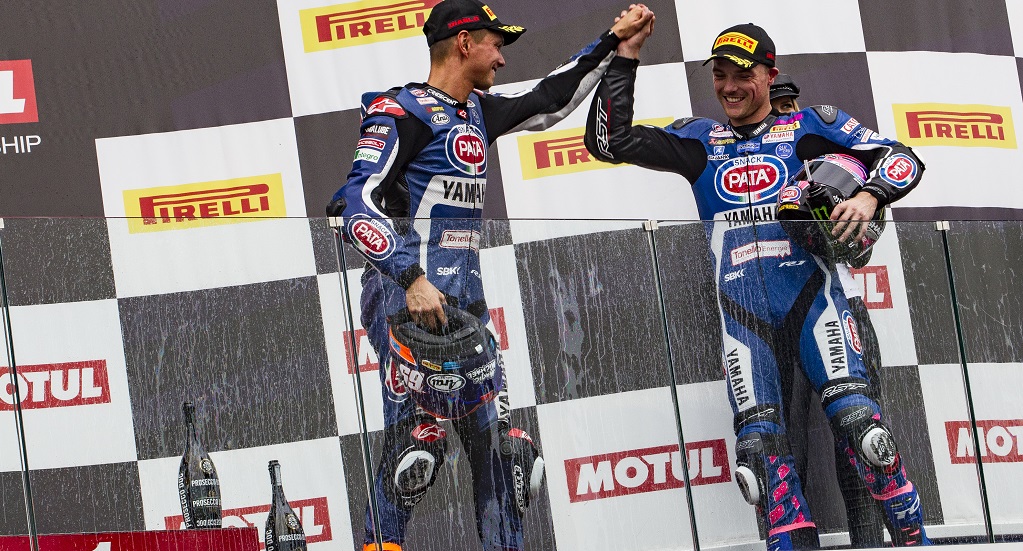 The Pata Yamaha Official WorldSBK Team delivered a stellar performance in Race 2 on Sunday at Magny-Cours, round 11 of the 2017 FIM Superbike World Championship. Michael van der Mark put on a brilliant show of riding after an excellent fight with teammate Alex Lowes to secure third place and record the Pata Yamaha team’s first double podium in WorldSBK.

Van der Mark had shown incredible fortitude in Saturday’s Race 1, remounting after a crash and storming through the field from last to secure ninth place after a brilliant comeback. It got even better in Sunday’s Race 2 as the 24-year-old, lining up in sixth on the grid, got an amazing start, riding around the outside of a number of riders through the first two corners to blast to the front of the field and do battle with his teammate for the lead. He crossed the line after the first lap in third, just behind Lowes, but with the conditions worsening, he decided to focus on finding his own race pace. He dropped to fourth briefly as he built his confidence on the slippery track but as the race progressed the Dutch rider’s pace improved dramatically and he was back in third by lap ten and starting to close the one-second gap to his teammate Lowes in second.

Just like his teammate, he put together an incredible sequence of laps in the low 1:39s, showing brilliant consistency and by lap 15 he was right on the back wheel of Lowes, battling for second and chasing down Davies in the lead. Then, as the rain got heavier and track conditions worsened he had a couple of big moments and, unfortunately, he just did not have the grip left in his tyres to push any harder. Maintaining his pace right to the end, van der Mark crossed the line in third, just 1.550s behind his teammate, to record his second rostrum in the last three races – after his second-place finish in Race 2 at Portimao – and secure the Pata Yamaha team’s first ever double podium in WorldSBK. The 16 points he received now sees the 2014 World Supersport Champion sixth in the overall standings with 189 points, just 11 behind his teammate Lowes.

Michael van der Mark: “It is my second podium of the season and I am so happy! Yesterday in the first race I was a bit unlucky but I scored some points. Today it was good to start from sixth on the grid for Race 2. I had a really good start and fought my way to the front but it was really difficult as there were some big drops of rain falling, so it was difficult to know what to expect. It was good for me to follow the other guys because I could see what they were doing. I was pushing quite hard but I also didn’t want to crash, it was so difficult but I tried my best and managed to stay on the bike. I just focused on finding my pace and it was similar to the guys in front.”

“Towards the end of the race I closed the gap to Alex, but then I made some small mistakes and I just didn’t have the tyres anymore to attack again. It was a little bit of a weird race but Alex and I were really strong today and it was great to share the podium with my teammate. It was not the easiest race to control but in the end, we were both on the podium and that is what we aim for. We have made a good step forward and this result, along with Portimao two weeks ago, shows we can fight for the podium at every round. I am really happy and I look forward to Jerez already. On Friday I was really fast immediately, so I think we have found a good base with the R1 now and this has given me a lot of confidence. Jerez is a special track for me, and one I really like. We cannot wait to go there!”