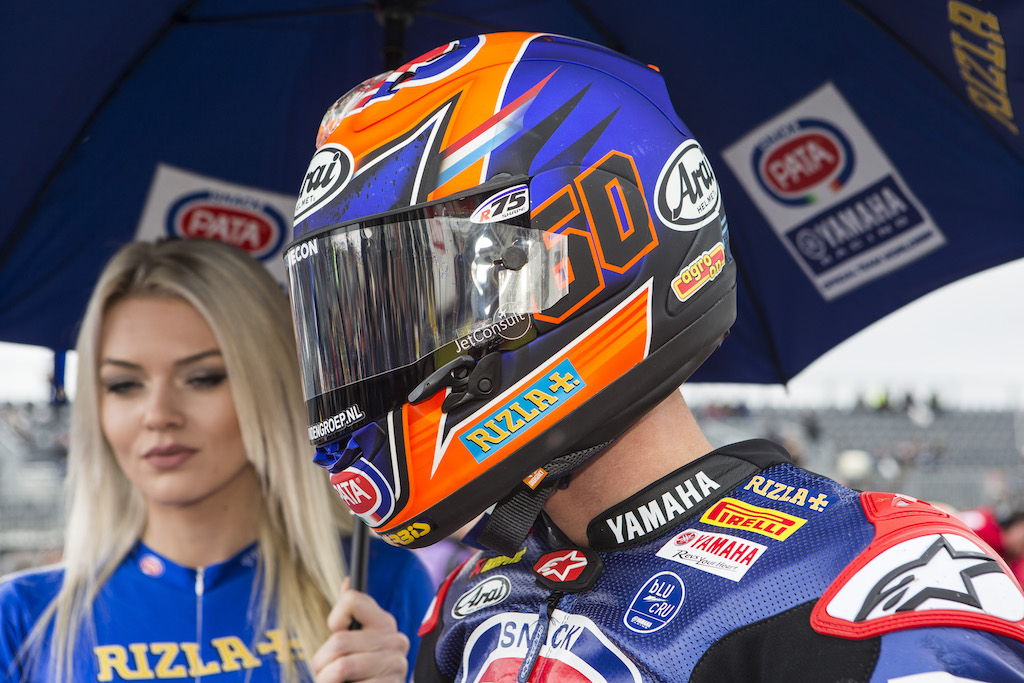 Michael van der Mark fought valiantly during a two-part Race 1 at Aragon on Saturday at Round 3 of the 2018 Motul FIM Superbike World Championship. Michael van der Mark backed up his pace in the mixed conditions on Friday by qualifying in ninth. In the original race, he didn’t enjoy the best of starts but was on a charge when the red flag came out on lap 4. In the restarted race, he showed excellent consistency despite not having the best feeling with his R1 to cross the line in a solid fifth place.

Van der Mark had ended Friday’s practice in seventh overall on the timesheets with a 1:51.347 after displaying good pace in both the wet and dry. On Saturday morning, the 25-year-old Dutch rider ended FP4 in fifth place before going on to enjoy a promising SP2 that saw him qualify in seventh for Race 1 after setting a 1:49.863, just 0.320s off pole. When the lights went out in the original race, he shot up the inside into Turn 1 but missed his braking marker and ran wide, dropping back to 13th. Undeterred, he scythed his way through the field and was up to sixth when the red flag came out on lap 4. In the restarted 17-lap race, he enjoyed a much better start, battling in the leading group of eight riders right from the off. He built up his rhythm and started to make his way through the pack, passing his teammate for fifth on lap six.

Unfortunately, he was suffering from a slight difficulty on corner entry which meant he could not chase down the leaders but the 2014 WorldSSP Champion showed excellent consistency to cross the line in fifth place and collect 11 championship points. This now means he is just one point behind his teammate Lowes in the overall standings in sixth with 56 points from the first five races. Van der Mark will line up on the grid in the middle of the front row tomorrow, hoping that he can add to his 2018 podium tally after his superb ride to second in Race 2 at Thailand.

Michael van der Mark: “First of all, I was really happy with Superpole! We seemed to struggle this year and last year with qualifying and today we gained a lot with the qualifier and I finished the session in sixth, which I was quite happy with. We reduced the gap significantly to the guys at the front and I was close to Alex, so I was really happy with that. For the first race, I had a good start but missed my braking point into Turn 1, ran wide and I was coming back through the field when the red flag came out. After the red flag, in the restarted race I had a slight issue when back-shifting so, it was difficult. I had a really good start but then I had to find a way to ride the bike to manage the issue. With this problem, we must be really happy to have finished in P5 but we will fix the issue for tomorrow and then I hope we can fight for the podium!”

Van der Mark and the Pata Yamaha Official WorldSBK Team return to action on Sunday morning for Warm Up at 9:35 am local time (CEST) in Aragon, with Race 2 due to kick off at 1 pm.