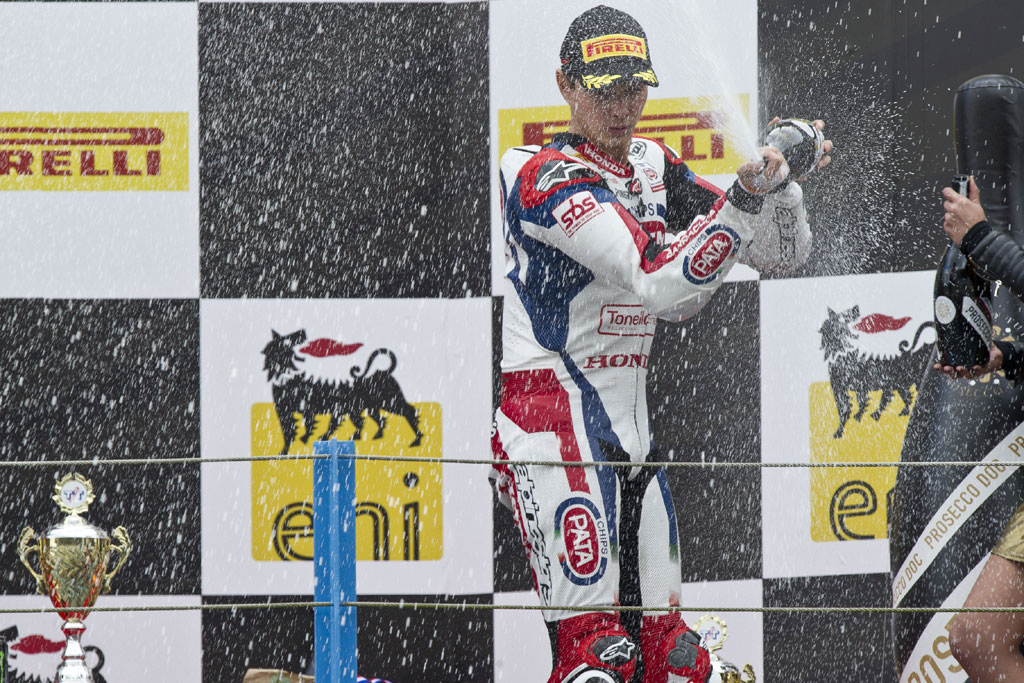 Michael van der Mark took his maiden World Superbike championship podium in the first of two fourth-round races at Assen in the Netherlands this afternoon and followed it with another in the second outing in front of a delighted home crowd. Both races were won by British rider Jonathan Rea. After starting from fifth place on the grid in his World Superbike debut at the 4.542km Assen circuit, the 22-year-old Pata Honda rider finished third in both thrilling 21-lap outings, becoming the first Dutch rider ever to stand on a World Superbike podium.

SBK rookie van der Mark was able to exploit the handling ability of his Honda CBR1000RR Fireblade around Assen’s fast-flowing corners to fight with the leading group in both races, enjoying battles with vastly more experienced superbike riders. But, in front of an enthusiastic and appreciative crowd, van der Mark saved his boldest move for the final lap in race two when, after seeming to have lost contact with the leaders earlier in the race, he forced his way past Leon Haslam heading to the final Geert Timmer chicane to grab the final podium place once more.

Michael van der Mark (3rd and 3rd): “Race one was amazing and I’m glad we were able to be fast because we saw how consistent Jonathan [Rea] was yesterday. My start wasn’t great, but I had a good pace and was able to get back to the front group step by step. To be able to take my first podium here at my home round with a Dutch team and all the sponsors was amazing. In race two, Leon [Haslam] and I had a nice fight – we were strong in different parts of the track – but I knew I had to get by him. I passed him in the Ramshoek on the last lap and then into the chicane he came around the outside. We both braked really late and had to sit up but I’m really happy with the two podiums here. It’s way better than I could have expected this weekend. I must thank the team for giving me a really good CBR, and now I’m really looking forward to Imola. On the cool-down lap it was great to see so many fans on the track waving the Dutch flags. I’m really proud that so many people came.”